Lanark Limelights returned to the Online Timed Auction, where 67 entries were put forward, with bidders from across mainland UK and Ireland.

Texels topped the sale at 2,700gns with an in-lamb Gimmer (pictured below) from new consigner, Usk Vale Pedigrees Ltd, Lower Gaufron, Powys selling to Mr G Buchan, Clinterty Texel flock from Aberdeen. With this purchase he receives a Knock-bred gimmer sired by Knock Dalwhinnie carrying a single to the 100,000gns Glenside Forever II. The gimmer herself is a maternal sister to the dam of Seaforde Empire King, Knock Crackerjack and the 1st Prize Aged Ewe at the Royal Welsh Show 2022. 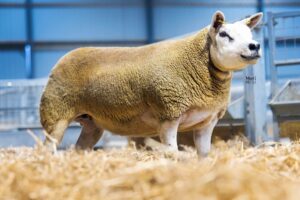 Bluefaced Leicesters were next top price at 2,300gns for a Ewe Hogg (picture below) from Messrs J Wight & Sons, Midlock, Crawford. She is a daughter of Midlock Zeus N002 and out of a homebred dam M071 who herself is sired by Marriforth K004. She heads to New Cumnock with Messrs J Guild, Ashmark. 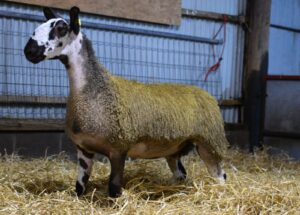 Midlock were also back in the limelight with their next lot, another Ewe Hogg (pictured below) selling for 2,100gns. She sold to Messrs RJ Fallows & Sons, Cockrig Farm, Lanark. For their money, they get a daughter of the Marriforth N024 out of a homebred ewe sired by Midlock Mustang F027. 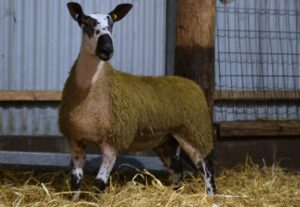 Another new consigner to the sale, was Texel breeder – Messrs K & L Pratt, Oldtown, Peterculter who owns the Hilltop flock, run under the watchful eye of shepherd, Richard Reynolds. The team sold an in-lamb gimmer (pictured below) to a top of 1,000gns to J Gunn, Main Street, Keith. Sired by Sportsmans Cannon Ball, she is out of a Sportsmans Admirall II sired homebred dam. She sold carrying twins to the 28,000gns Auldhouseburn Fancy Pants. 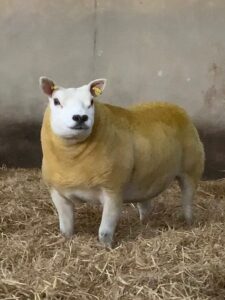 David Morrison, Dalwyne, Girvan offered for sale Blue Texel Twin Implanted Embryos to a top of 800gns to Mr G Fleming, Nether Brotherston Farm, Heriot. They are sired by the Saltire Blue Ferocious and out of the Little Whisker Import who is sired by Rap-Heything. 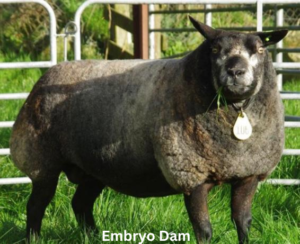 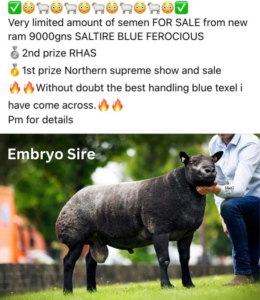