AVERAGES RISE AS THE CURTAIN COMES DOWN ON SANDYKNOWE SUFFOLKS

The torrential rain on Thursday, failed to dampen the spirts of those who attended the last sale of the Sandyknowe Suffolk flock. At the fall of the final hammer, the 53 shearlings, all of which were in the top 5% of the breed on figures, had found new homes and averaged £1052 to a top of 6000gns.

Sandyknowe is the oldest performance recorded flock in the UK, making its produce well sought after by commercial breeders, for both terminal sires and rams to produce females.

Scored by The National Suffolk Breeding Evaluation, which has now replaced the Sire Reference Scheme, it compares all performance recorded Suffolks in the UK. The current breed average for Terminal Sire Index in the breed is 135. The top 25% score in excess of 182, the top 10% in excess of 224 and the top 5% in excess of 249%.  Testament to the breeding programme in the flock, every one of the 53 rams offered for sale were in the top 5% of the breed.

It is the exceptional high indices and performance in the Sandyknowe flock, that have made them so desirable over the years.  This year was no exception, with the top price of 6000gns being paid for a ram with a terminal sire index of 444. This outstanding ram went to James Hamilton, Hole Farm, Hadlow, East Sussex . He is by Sandyknowe Y13: 20:16643 sold last year for 1500gns to Saughland Farm and now part of the Ram Compare Scheme and out of a ewe by Sandyknowe Leader 13:2

Another at 2000gns again went to regular buyers, This time The Firm of K MacKenzie, Whitebog Farm, Fortrose.  By Y13:20:16710 this ram is out of another ewe from the Leader line, Sandyknowe Leader 18:1.

Last of the day but by no means least, was the ram which Malcolm Stewart had chosen from the flock, to be sold in aid to Chest Heart and Stroke Scotland.  He was to have been sold by Stuart Allister, now retired auctioneer, who had sold the first Sandyknowe ram at Kelso in 1964.  Unfortunately, Mr Allister was not fit enough to attend but sent a heartfelt message, which was read prior to the sale.  The ram, by Y13:20:16643 went onto make 2,200gns and sold to Bainbridge Farms, Donkin Rigg, Morpeth, Northumberland. 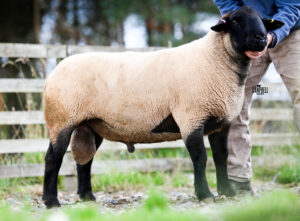 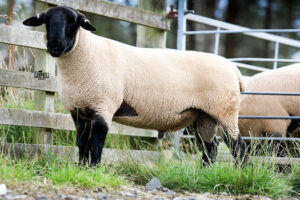